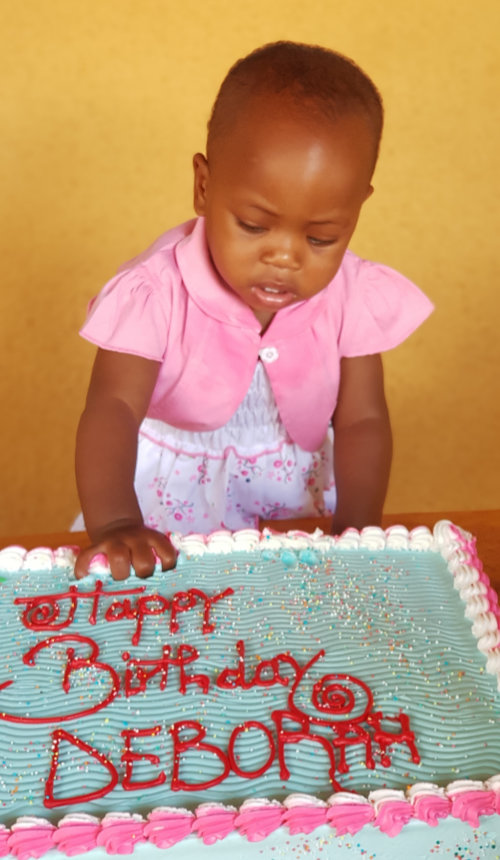 As we celebrated Deborah’s 1st birthday, I was brought back to the day she arrived at Treasures and marveled at what a difference God had brought about in one year. She had been found abandoned, lying in the dirt, only minutes old, in the pre-dawn darkness by rural villagers who had heard the birthing screams of the mother. Within a matter of a few hours, she was brought by the Welfare officials to Treasures of Africa.

She is the very first sweet treasure I held in my arms on the actual day of her birth. God’s loving hand brought her to us on the very day she was born and I will never forget what I felt from the Lord in that moment. The beauty of His presence and His Father’s heart that loves, protects and cares for His children was overwhelming. I knew it was His hand that had brought her into this world. It was God that had kept her alive, watched over her and had given her to us.

It is because of God’s hand and His power that we are celebrating her life and now enjoying her as part of our family here. The Lord spoke so many things to my heart the day I first held her in my arms about her life and her future. And, as He spoke them to my heart I declared them and prayed them over her. I spoke to her about how greatly she is loved and of the great things the Lord has in store for her. And of how she would grow up strong in His love and in Him.

He gave me the name, Deborah, and spoke to my heart of how she will be like Deborah of the Bible. A woman of great courage and strength who is sensitive to His guidance and to His voice. As we have watched her grow this first year of her life, we have already seen the fruit of what the Lord had us pray and declare over her. It truly has been amazing!

Deborah is so beautiful, smart and so full of life already. She has a great personality and is playful and loves to smile. She began using her voice at a very early age making her own unique sounds and trying to form them into words. She also began pulling herself up and then walking long before most of our children. There is something so very unique and special about Deborah. It doesn’t take long before one is aware of it.

Our hearts are full of thanksgiving and praise for all He is has done, all He is doing, and all that is yet to come. Thank you so much for being a part of celebrating her life which is such a beautiful and precious gift from above!

More Stories About Our Treasures

Would you like to recieve our Victory Newsletter along with other news updates delivered to your email inbox?